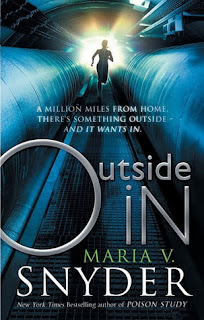 Outside In
by Maria V. Snyder
Harlequin Teen
February 2011

First line: "My world changed in a heartbeat."

Trella's journey through space continues in this sequel to Inside Out. As before, time is referred to in weeks - characters are so many "weeks old" events happened a certain number of "weeks ago." It gives the whole book a bit of alien flavor. The ship's estimated time of arrival, one million weeks, means they'll actually be spending nearly 2,000 years in space! The mystery of where they are has been solved: the crew of their generation spaceship will be spending the rest of their lifetimes (and their children's lifetimes) traveling towards a planet where they can finally live "Outside" again.

In the meantime, Trella is facing the hard work of reuniting the "scrubs" and the "uppers" on board the ship. Frankly, the same kind of loner, adventurer spirit that enabled her to explore the ships air ducts for hours on end, eventually discovering the "Gateway" airlock to Outer Space, as well as additional levels of the ship, planned by their ancestors for the inevitable population crowding that they face, is exactly the same kind of spirit that makes her a stunningly inappropriate choice to be on the ruling council. She regularly skips out on council meetings in favor of poking around the ship's tunnels as she used to do.

Engine problems on the ship create chaos, just as Trella is dealing with being reunited with her estranged mother Dr. Lamont as well as her deepening relationship with her boyfriend Riley. It turns out that the ship's mechanical problems are due to outside interference. But who or what could be harassing the citizens of Inside from so deep in space?

I'll recommend this for tween readers who aren't quite ready for Across the Universe by Beth Revis. The plot moves quickly, and the romance is fairly tame.

I received a free copy of this book from the publisher.
Posted by Madigan Mirza at 2:23 PM 4 comments: 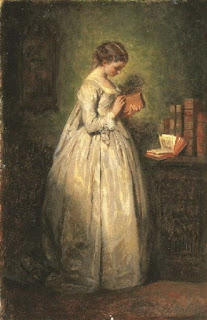 Last month I read the following: