Top 10 books that were hard to read

This week's topic from The Broke and the Bookish is: Top Ten Books that were Hard to Read.

Here are mine, in no particular order, books I only gave a 1-star rating to: 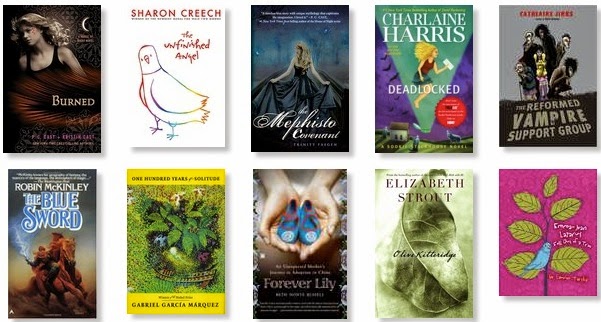 1) Deadlocked - Charlaine Harris
The penultimate book in the Sookie Stackhouse series had so little plot development, I kind of gave up finishing the series.

2) Olive Kitteridge - Elizabeth Strout
This series of interconnected short stories about a bitter old woman was absolutely not my cup of tea.

3) One Hundred Years of Solitude - Gabriel Garcia Marquez
I do not care for magical realism! My friends like to joke that I like my magic systems to be realistic, but don't want my realism to be magical.

4) The Blue Sword - Robin McKinley
I know! Shocker! This should be the kind of book I love. It came so highly recommended to me, I don't think it ever could have lived up to the hype. It just didn't feel magical enough for me.

5) Emma Jean Lazarus Fell Out of a Tree - Lauren Tarshis
The main character was so painfully awkward. This was a tough one to slog through.

6) The Mephisto Covenant - Trinity Faegen
I read this on the heels of reading several teen paranormal dysfunctional relationships parading as "romantic" and it was just too much for me to take.

7) The Unfinished Angel - Sharon Creech
I love Sharon Creech! This book was so not her normal style though. The angel had such a disjointed way of speaking. I didn't care for it.

8) The Reformed Vampire Support Group - Catherine Jinks
Ugh. Depressed vampires didn't do it for me.

9) Burned - P.C. Cast
This is where I ran out of steam for the House of Night series. The scenes where Zoey Redbird confronts her child self are just so very, very cringeworthy.

I love this display for Banned Books Week, at one of my favorite independent book stores, Little Shop of Stories. The "caution" tape is de rigueur but the BAN ALL THE THINGS! cartoon really makes this display stand out to me. Love it!

Posted by Madigan Mirza at 10:13 PM No comments:

Fast-paced second person narration places the reader squarely in the head of amnesiac teen girl who only knows that she has a blackbird tattoo on her wrist, and someone is trying to kill her. Quickly adopting the nickname Sunny, the main character soon finds herself framed for theft. Not trusting the police, she manages to find sanctuary amongst a group of wealthy Los Angeles teens. There is some romantic tension between her and Ben, her rescuer. Sunny soon finds she has abilities she didn't know she had, dodging assassin’s bullets and escaping into a crowd, but also excelling in close hand-to-hand combat when cornered by her pursuers. Tantalizing flashes of memories along with clues from her pursuers reveal that Sunny is a teen runaway without a family, who depended on a handsome friend to survive the rigors of being hunted by jaded elite.

Plenty of sudden plot twists will leave readers guessing as to who to trust. Inspired by Richard Connell's classic short story, The Most Dangerous Game, the book draws to a satisfying close, but leaves plenty of room for more issues to be resolved. Readers of contemporary young adult thrillers will be clamoring for the sequel.

This review originally appeared in School Library Journal.
I received a free copy of this book from the publisher.
Posted by Madigan Mirza at 4:39 AM No comments:

Aww! Here's a heartwarming video on libraries put together by vloggers 2 Broke Geeks.

Posted by Madigan Mirza at 4:19 AM No comments:

Top 10 Only One Book

This week's topic from The Broke and the Bookish is: Top Authors I've Only Read One Book From But NEED to Read More.

Mostly, these are books I loved, and definitely want to read the sequels, but just haven't had the time yet. Lots of fantasy and time-travel here!

What authors have you had a sample of, but just can't wait to read more?
Posted by Madigan Mirza at 3:05 AM 2 comments:

Here's a great infographic, put together by Goodreads, on the upsurge in teen dystopian novels.

Posted by Madigan Mirza at 4:47 AM No comments:

First line: "'Fei Ting, you are my reason for living,' Mom says to me. 'You give me a purpose for my suffering."

High school senior Frances is a timid and obedient girl, who only longs to excel in school so she can satisfy her mother's wishes of seeing her go to Stanford and become a doctor one day. This story was essentially Battle Hymn of the Tiger Mother... from the unhappy daughter's point of view.

Chinese-American Frances has grown up in a cramped apartment with her single mom in San Francisco. The story takes place in the 1980's and obviously, Frances doesn't have access to internet, cell phones or social media, making her isolation from the mainstream all the more possible. Frances is truly withdrawn and mentally beats herself up for always falling short of her mother's impossible expectations.

The mother in Bitter Melon is incredibly unlikeable. I would have liked seeing some more shades of grey for a more nuanced and compelling story. The book opens with a disgusting scene where Frances is being forced to massage her mother's stomach as her mother loudly belches due to her ongoing stomach problems. Even allowing for the fact that the mom is very hurt at being abandoned by her wealthy husband and forced to raise her daughter alone and close to poverty, it's impossible to work up any sympathy for her. She is tone-deaf to any of her daughter's feelings and seems to enjoy constantly putting Frances down, fearing that any kindness will make her daughter too soft. The mother's plan for Frances to go to med school so that she can treat her mother for free and finally work out her stomach problem seemed idiotic to me. It's hinted that it's a pretty serious problem, possibly even stomach cancer... wouldn't she be dead by the time her daughter finally finishes medical school?

Due to a mix-up at school, Frances finds that instead of being registered for Calculus as planned, she's been assigned a speech class. In a small act of rebellion, she decides to stay enrolled in the class, and begins competing in speech tournaments and winning. She also hides a crush on a boy from her mother, and starts to imagine what life would be like if she didn't pursue pre-med.

Frances finds a friend for the first time in her goody-goody cousin Theresa. She's spent years pitted against Theresa, due to their mothers' continual bragging and put-downs, but when Frances lets her guard down and trusts Theresa she is surprised to discover a valuable ally.

Ultimately, Frances house of cards comes crashing down when her mother finally discovers her complex web of lies. Surprisingly, Frances mom is on board with her new speech class, once she learns that Frances has been winning awards. She shifts gears, and begins to insist that Frances work towards becoming a newscaster or television personality, putting her daughter on a punishing diet so she'll look good for the cameras. Interestingly, Frances and her mother never really resolve their issues. For Frances, the only way to handle things is to start being more outspoken, contradicting her mother in public by challenging her mother's put-downs and finally, to secretly squirrel money away so that she can make her escape and lead her own life.


I borrowed this book from the library.
Posted by Madigan Mirza at 4:25 AM No comments:

16 year old Ever is the sole survivor of a horrific car crash that killed her entire family. The shock of the incident has awakened psychic powers in her which allow her to speak to her bratty younger sister's ghost, and read the thoughts of everyone around her. Overwhelmed by the barrage of thoughts from her classmates, and trying to adjust to her new life with her career-driven aunt Sabine in Southern California, she withdraws into herself, wearing oversized hoodies, and listening to headphones as a way of trying to block everything out. Ever is fascinated with a new guy at her school, Damen Auguste, as she finds that he is one of the only people that she cannot read, and spending time with him brings merciful relief from the normal psychic chatter that she is subject to. This reminded me a lot of Twilight, as her power seemed similar to Edward's. Ever remains timid and helpless throughout most of the story.

Wealthy, jet-setting, sophisticated and bored, Damen Auguste doesn't eat much except for a mysterious "red juice" and it seems as if he's much, much older than he's letting on. School is a breeze for him. Surprisingly, the big reveal is that he's not a vampire, but an Immortal, an alchemist from the Middle Ages who has discovered a potion which gives eternal youth. Damen treats Ever badly, pouring on the charm, and then ignoring her, getting her into dangerous situations and then disappearing, leaving her to deal with the consequences. He showers Ever with tulips, and then turns around and starts flirting with other girls right in front of her.

Ever's reaction to this treatment is rather spineless. She's hopelessly devoted to Damen, and with every cruel little barb he throws her way, she finds ways to justify his behavior. Ever eagerly dumps her only friends, poor-little-rich-girl Haven and gay musical theatre kid Miles as soon as Damen is on the scene. She discovers that she has been reincarnated many times over the centuries, each time meeting and falling in love with Damen, but always meets an early end via Damen's jealous ex-wife, Drina, who is determined to keep her man to herself. Ever's final showdown with Drina seems anti-climatic when Damen steps in at the last possible moment and rescues her.

What this book does have going for it, is readability. It's a light, undemanding read. Noel's alternate take on immortality will appeal to teen readers who enjoyed the Twilight series.


I borrowed this book from the library.
Posted by Madigan Mirza at 4:27 AM No comments:

Posted by Madigan Mirza at 4:41 AM No comments: