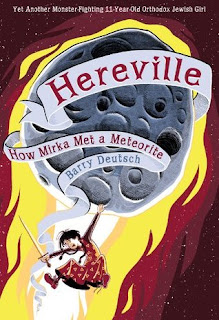 Hereville: How Mirka Met a Meteorite

This wonderful middle-grade graphic novel continues the adventures of Mirka Herschberg,  an irrepressible 11-year-old Orthodox Jewish girl. Mirka, a bit of an imaginative tomboy, is frustrated with knitting and antsy for adventure and makes for the woods to meet up with a witch and a troll. The snarky arachnid troll nebbishly clutching a purse and umbrella, decides to summon a meteorite, which the witch promptly turns into a doppelganger of Mirka.

Mirka's double soon acquires the name Metty, and just as in any classic golem story, Mirka is dismayed when she finds herself an outsider in her own family as Metty takes over mealtimes, (leaving chores for Mirka) and even stealing her Sabbath. Challenging her to a duel, Mirka only wins via her siblings clever interpretation of the contract she and Metty had agreed to.

Peppered with Yiddishisms, and with lots of tiny, thoughtful details in the illustrations, this is a graphic novel that stands alone, or can be enjoyed as part of the series. Either way, you won't want to miss this one.

I received a free copy of this book from the publisher.
Posted by Madigan Mirza at 9:02 PM No comments:

When You Were Everything review 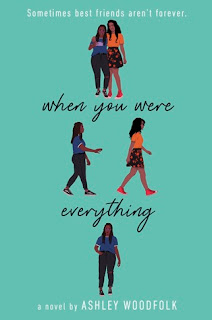 Cleo and Layla have known each other since they were both twelve years old and have been the very best of friends. They are both girls of color, living in bustling New York City. Going into their junior year of high school, it seems they've had a major falling out. This is a nuanced young adult contemporary novel about what the aftermath of  an imploded friendship looks like.

There is a plethora of suspense as the story jolts forward in two time-lines, Then and Now, leaving readers to wonder how on Earth such a close and loving pair of friends managed to turn on each other so completely. What starts as a few small incidents showing that the two young women are slowly growing apart, quickly escalates into a death by a thousand cuts, as their friendship is tested by conflicts over cute boys and popular cliques of girls. As the story unfolds, one betrayal after another is revealed, eventually laying bare all of the gory details of the kind of online bullying Queen Bee mean girls are capable of. Cleo is truly a sympathetic narrator, even as she gradually admits to herself how controlling and difficult a friend she has been.  Fans of Angie Thomas or Jacqueline Woodson and anyone who's ever been a friend, or lost a friend needs to read this book.
Posted by Madigan Mirza at 4:31 PM No comments: