My latest project has been to work on weeding my branch's juvenile non-fiction collection. It hasn't been weeded in a very long time. Every so often our library system releases a "dusty list" of books which haven't circulated in over a year, and we are encouraged to make any weeding decisions based on that. I think that weeding needs to be at least a weekly project however, because otherwise it simply piles up and becomes completely unmanageable.
BEFORE: 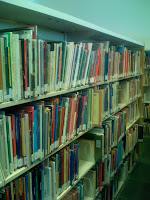 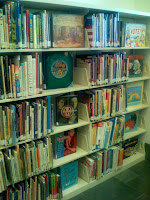 Gosh, that looks like an awful lot less books doesn't it? Well, it's not quite as bad as it seems. We also did a stack shift to an adjacent free range of shelves which freed up a lot of space. Being able to display books face out at the end of each shelf has helped some titles shine which otherwise might have been overlooked.
And then too, I don't think the children in our community are best served by titles like these: 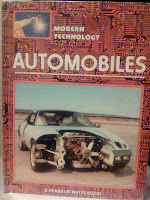 Written in 1985, this book was probably pretty ground-breaking for it's time.

Zooming in, here's a spread on automobiles of the future. This is a prototype of what they think car dashboards might look like by the year 2000: 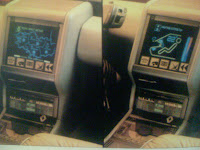 The author predicts that we might develop gas/electric "hybrid" vehicles by the year 2020, but isn't optimistic about the prospect, as most battery powered vehicles "can only achieve max speeds of 12 miles per hour."
I suppose you could make a case for keeping a book like this in the public library, "Oh, but boys love cars!" However, I'm thinking that to most six, seven and eight year-olds in my branch, the year 2000 doesn't represent the future, but instead, is something that happened before they were even born!
This weeding project was a grueling job, and as a booklover, it's always heartbreaking to bid goodbye to books, no matter how old, or how little use they've gotten. My feelings were ameliorated by donating some of the nicer looking titles to an Indian reservation in Arizona, where they'll get a second shot at life.
Posted by Madigan Mirza at 5:45 PM