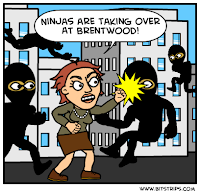 The kids read, they weighed-in and they voted. They got exactly what they wanted. A totally ninja-themed end-of-summer party.
For some reason, I had imagined that hosting a ninja party would be a cinch. I'd planned on hitting the 99 cent store or perhaps a party goods store, going straight to the "ninja" aisle, and picking out a bunch of decorations to purchase with a donation from the library Friends' group. Alas, it was not to be so. I went to at least four different stores, and found absolutely nothing. Well, ninjas are supposed to be stealthy... I did find quite a lot of pirate decorations, though. I found Spongebob Squarepants dressed as a pirate, Mickey Mouse dressed as a pirate, sports pirates, sea pirates, party pirates. Pirates, apparently, do not lie low.
In the end I lit upon a far cheaper option than purchasing decorations... I printed out some ninja pictures from the internet and hung them up. I added some red and black crepe paper we had lying around. I think the black was left over from a black and orange set from Halloween, and the red came from a former Valentine's Day celebration.

I printed out the large ninja on the left using the rasterbator site. It creates an enlarged multi-page version of whichever image you upload. I created the flag of Japan by using an old poster. First, I hung it up with the plain back of the poster showing. Then I added a red construction paper circle. Easy.
We had the favorite food of the Teenage Mutant Ninja Turtles: pizza. And I handed out free paperback books (donated by the publisher) to all the kids who participated in the Read-a-Ton challenge this year.
I can hardly believe this was all only a week or so ago. The start of the school year is just around the corner. And! I'm now at a different branch! (but more about that in a later post...)
(My thanks to 100 Scope Notes for pointing me to bitstrips.com for the cartoon image. It really is easy, and very fun to do)
Posted by Madigan Mirza at 2:06 PM