Forest of Hands and Teeth review 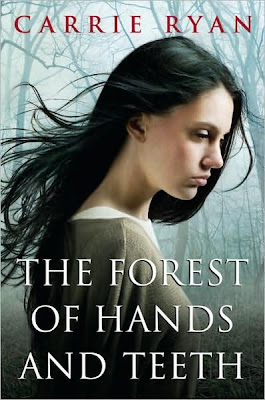 
Wow. Just, wow. This is zombie fiction, the way it should be written. The story starts out with a striking similarity to M. Night Shyamalan’s The Village, but quickly morphs into something else entirely. Mary hasn’t known any other world than her small village. The secretive religious order of the Sisterhood tightly circumscribes every detail of the villager’s lives in this last outpost of humanity. The villagers are told that only their obedience to the Sisterhood and their constant vigilance will keep them from being overrun by the Unconsecrated zombie hordes, just beyond the chain link fence.


When Mary loses both of her parents, and Travis, the boy she’s crushing on, doesn’t speak for her, her fate seems sealed. She’s forced to join the Sisterhood, whose only interest seems to be in quashing her dreams of rediscovering the ocean. It’s a grim world. As Mary says, “There are no second chances for the women of my village.”


As is the case in any good horror movie, tension mounts as the action telescopes down to a smaller and smaller cast of characters. When the village finally falls, only Mary and a small rag-tag crew manage to escape. One by one, they succumb to undead, forcing the friends to lay arms against each other before all are turned.


I’m not sure what the takeaway on all of this is, except that a world lousy with zombies doesn’t have room in it for a boy with a bum knee (not even a really cute boy.) And aside from being hunky (and bravely sacrificing himself towards the end) Travis isn’t really good for much. He’s pretty wishy-washy! He’s attracted to her friend, Cass, yet seems content to snuggle up with Mary when they end up isolated together. She could do a lot better. Mary is the one with the determination and the initiative to keep on struggling, no matter what.


There are a lot of unanswered questions by the end of the story… not quite in the same vein as Lois Lowry's The Giver, but enough for Ryan to mine for several more sequels at least. The sequel, The Dead-Tossed Waves is being released in Spring of 2010. I can hardly wait.
Posted by Madigan Mirza at 10:01 PM