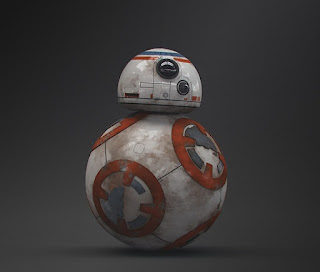 Hey, hey! It's that time of year. How did my resolutions from last year work out, and what have I got up my sleeve for this year?
I've had a fun little tradition of using a Star Wars character for each year's resolutions. I started in 2010 with Yoda, because, I realized that I would usually say that I was going to "try" to make all my resolutions stick that year. That was when I decided that "Do, or do not, there is no try." 2011 was Luke Skywalker, because I felt very noble about my resolutions - very determined to see things through. 2012 was Han Solo because I felt like I was shooting from the hip! 2013 was Princess Leia because I was feeling very smug about how well things were going. 2014 was R2D2 because I felt like I was determinedly chugging along. Last year was Queen Amidala, because I was pregnant.

Last year, I resolved to keep up with blogging 1-3 times a week. That totally fell apart once I returned to work after my maternity leave! But, I did post something about once a month, at least. This year, hopefully I'll keep up with one post per week.

I resolved to write reviews immediately after finishing a book. That also worked out pretty great at first, but kinda slowed down towards the year's end. Last year, I pledged to read 10,000 pages. I read 6,269, so a little over half what I thought I would. I said I'd cut down my TBR - I made two massive chops, and was a little more selective than usual in adding new items. I wish I'd kept track of how many items were on my To Be Read List - I think it was somewhere in the neighborhood of 600+. Right now my TBR has 372 items. That's still realistically, more than I could read in a year's time, so another cut is on the way. This year, I'd like to trim my TBR to less than 365 books, at least!

In 2016, another big goal of mine is to read a picture book with my baby daughter every day. She loves books. We have really enjoyed repeat readings of It Looked Like Spilt Milk by Charles Shaw and other high contrast favorites. She enjoys looking at the pictures and patting the pages of super simple board books. I'm really looking forward to sharing more old favorites and discovering new books in the coming year.
Posted by Madigan Mirza at 1:30 AM