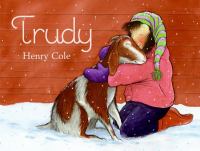 
Oh, how I longed for a pet goat when I was a child! So many of my friends had goats and they gave them the dullest, most obvious names. Billy. Nanny. Cappy.
I swore if I were ever lucky enough to get a pet goat, surely I'd give it a name with a little more pizzazz than that. While "Trudy" had never crossed my mind as a potential name, it surely would have if this book had been around when I was younger.
Prolific children's book illustrator Henry Cole has put together a captivating goat tale. Esme goes with her grandfather to the county auction to look for an animal to purchase. Nothing feels quite right. Holsteins are too big. Grandmother is allergic to feathers, so birds are out. Pigs are too stinky.
Wonder of wonders, here in a corner of the barn is a sign, "'Trudy' Free to Good Home” Trudy, of course, turns out to be a shy looking goat, with just a hint of sass behind her demure eyelashes. Grandpa chortles that the price is right, and Esme and Trudy quickly become fast friends. Esme takes care of Trudy, reads to her and even talks to her about her day. Astute readers will notice little details such as Esme reading "Jack's Garden" (also by Henry Cole) to Trudy.
Soon, Esme notices that whenever Trudy retreats to her barn, snow is certain to follow. A steady following for the prognostic goat emerges and the local townsfolk don’t hesitate to make Trudy a media sensation. (One is reminded strongly of a particularly famous "Some Pig") One illustration shows a bumper sticker affixed to a neighbor's car, "I Get My Weather Reports from TRUDY" and shortly after, we see a two-page spread with late 50's model cars, pick-up trucks and news crews circled round Trudy's modest shed. An enterprising townsperson has even set up a hot cocoa stand.
This last time, it's not snow however, that keeps Trudy in, rather, it’s a brand new “kid” for her to take care of.
Cole's gentle acrylic illustrations are almost reminiscent of watercolor, with a nice balance between vignettes of Esme and Trudy and full-spread illustrations of the farm. I loved this book… for anyone wanting to look at a charming old-fashioned story about an unusual pet, this would be a terrific read.
Posted by Madigan Mirza at 6:21 PM