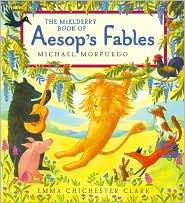 The McElderry Book of Aesop's Fables


Soft and sunny watercolors are the star attraction in this edition of read-aloud fables. Originally published in England, the majority of the stories are well known favorites. The twenty-one different tales include such favorites as The Lion and the Mouse, The Hare and the Tortoise, The Town Mouse and the Country Mouse; as well as lesser-known tales such as The Travelers and the Bear, The Rat and the Elephant, and The Wolf and the Donkey. Large type print is punctuated by watercolor decorations as well as occasional half-page and full-page spreads of animals.

The illustrations of the somewhat anthropomorphized animals in the book have a fierce emotional intensity. In The Dog and His Bone, Dog's ebullient expression fades to a dismayed, downcast look when his own greediness causes him to lose his bone. He "walked off home, his tail between his legs, feeling very stupid and very annoyed with himself." In The Crow and the Jug, we are treated to pictures of a beaming Crow as he drops pebbles in the jug "What a clever crow, he thought as he drank. What a clever crow." He's shown gazing around, clearly pleased with himself. This book is geared for children aged five to eight.
Posted by Madigan Mirza at 11:09 PM