Well, here is my report on the Festival of Books from this weekend. It was tremendous. Very interesting, very overwhelming, fortunately not too hot, but my goodness extremely crowded. I hear that the attendance was 130,000 for the whole weekend and I can believe it. It was the kind of crowd where you are simply pushed along in a sea of people being jostled and elbowed about as you attempt to rubberneck everything in the display booths. I took a picture from the top of the steps looking west, but I still don't think it does it justice. 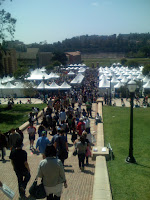 The great mass of humanity at the book fair this weekend.
As always there are simply too many awesome things going on all scheduled at the same time. I really wanted to see Susan Patron, but sadly, the half-hour I'd allotted myself to walk across campus was not enough time to push past the crowds and get to the hall where she and other children's authors were speaking. Happily, I did get to a panel where Katherine Krull, Candace Fleming and Kadir Nelson were speaking about the educational value of picture books. Elizabeth Partridge was the moderator. It was a quiet panel... Nelson turned out to be much, much shyer than I would have thought.


Heading back to the main square, I came across this cool piece of wall art. Festival participants were invited to write with markers what they were reading right now. 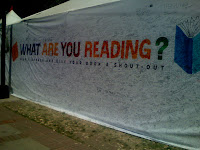 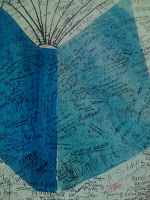 A close-up of the graffiti wall. Notice the large "Twilight" at the bottom of the book graphic? It was probably the most often written on the wall and always in the biggest font.
There were dozens of neat booths to check out. Brave New Voices, a new poetry show hosted by Queen Latifah on HBO had a booth with a rotating group of teens who stood on the nearby sidewalk, chanting urban rhymes.
I really wanted to see Kevin J. Anderson, who was discussing his newest book, Enemies and Allies, about Superman and Batman's first meeting in the 1950's. I just finished reading an advance review copy of it, and so I was very curious to hear his comments on it. (I'll post a review of it soon.) However! I also really wanted to see, speaking at the same time on the opposite side of the festival, Jon Scieszka of Stinky Cheese Man fame, so I wended my way over to the Target Children's Stage. Scieszka (say it, "SHESH-ka") was very entertaining. He read aloud a few things from The Stinky Cheese Man, as well as a short story or two from his autobiographical book Knucklehead. Mainly, his stories were about growing up among five brothers in Michigan and were pretty scatological, which all the kids in the audience seemed to enjoy.
There were a number of costumed characters there for kids to get their pictures taken with: Clifford, the Target Dog, some kind of dancing hip-hop character that bore a striking resemblance to Winnie-the-Pooh. My friends and I took advantage of this "lull" in the programming to check out more booths, and grab some lunch. I went over to see my colleagues at the LAPL booth. It was hopping! I didn't know any of the folks at the LAPL booth, but that didn't surprise me, as our system is so large, I'm sure I don't know even a third of all the people who work there.
Even though I was only there for a few minutes, most of the questions people asked at the LAPL booth were exactly the sort of things I thought people would ask:
Are you hiring right now? No.
Wow, can I really download e-books and e-books on tape for free? Yes.
Do you guys need degrees to be librarians? Yes.
Will there be a summer reading club for kids this summer? Yes.
If I come in can you teach me to use a computer? Yes.
Seriously, I don't know anything about computers, I'm a total beginner, can you help? Yes.
Right around the corner, the County Library of Los Angeles had a booth of "Library Scientists" dressed in white lab coats, surrounded by bubbling lava lamps, beakers, and books. It looked so cool! I wish I had snapped a picture of it.
That afternoon, I went to see Melissa de la Cruz, author of the Blue Bloods books, and several other teen series, back at the Children's Stage. Honestly, I felt so bad for her! I didn't think it was the best venue for her talk. The children's area was firmly dominated by the 5 and under set. Suddenly throwing a teen-vampire-romance author into the mix didn't seem to make much sense at all. Kids played in the aisles and parents stared at her glumly, as if to say, "Hey, bring that Winnie-the-Pooh guy back!" I guessed that she must have modified her talk a bit; she told everyone to follow their dreams, and then read the first chapter from her new book, The Van Alen Legacy, coming out next October.
By that point I was footsore and running low on sunscreen so that was about as much as could be packed into a single day!
Posted by Madigan Mirza at 1:18 AM