I had the opportunity to attend the Re:Imagine Ed Next Chapter K-12 Libraries Conference last weekend, and it's taken me a whole week to sort through my thoughts and impressions of the whole event. It was certainly the most original and most thought-provoking conference I've ever been to. You know that old saying, "Sit and get doesn't grow dendrites"? This conference was that philosophy fully in action. Participants were fully involved at every stage of the conference, with everyone encouraged to stretch their brain muscles and contribute at every level. Here are my notes from Day 1 of the conference.

Registration and Welcome
I arrived on the Lovett campus, a private K-12 school, stunned by the beauty of the natural setting and the clean, spacious buildings. The campus is as well-manicured and spacious as many 4 year-college campuses. My initial impression of the conference attendees was that they were earnest, cerebral and wealthy. Conference-goers were almost exclusively media-specialists at private schools, and ~99% Caucasian. Perhaps a third of the conference-goers were men.

Call for Design Challenges
Participants wrote comments on design challenges that have been posted on a giant whiteboard in the lobby of the theatre.  We were also invited to create new challenges, if so moved. Some of the challenges seemed kind of out there, “If the library was a restaurant what would be on the menu?” A few comments about bananas being the perfect food were listed here. “What sacred cows should the library abandon?” was followed by the declaration that “Sacred cows make the best hamburger!” Someone posted a challenge, “Why is everyone at this conference white? What can we do to increase diversity?” (Later, this challenge received many votes, but did not win the challenge for the top 3.)

Speeches from Laura Deisley and architect Jeff Sharpe, among others. 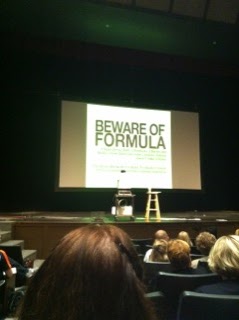 A webcam video starring educator Bud Hunt was shared. Everyone was very excited about this. I thought the production values were low, and unfortunately, he came across as rather creepy to me.


Participants were invited to put sheets of colored dots on the whiteboard next to challenges they were voting for. You could split your vote however you chose, or if you felt terribly strongly about a particular issue, devote all your “votes” to that one cause.
I had heard of this method being used at the Phoenix Public Library when they were gathering input from teens on designing their new teen space for the Central Library. I thought this method worked very well, and was a lot of fun! 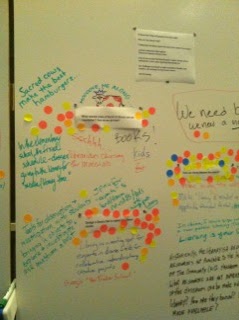 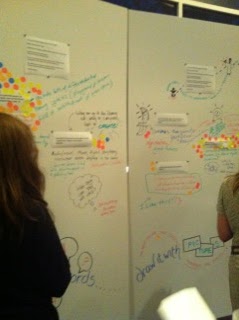 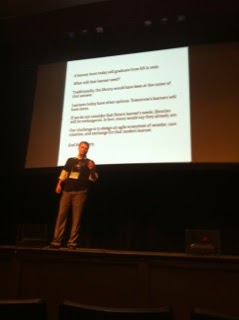 I was very impressed with Zac Chase, an English teacher, improvisational comic and master’s degree student at Harvard. He spoke about how to use rules from improv to work successfully with groups. All the material he covered was relatively familiar territory to me, and I was excited to see his suggestions put in action.
Yes, and...
Chase talked about the concept of, “Yes, and...” used in theatre. It’s generally funnier and more fun if you build on someone else’s idea rather than negating it. No matter how outrageous, just keep with the momentum, by saying, “yes, and...” rather than the deadly, “yes, but...” (which is really a “no” in disguise.)
My idea is good... but I like yours better!
Another way of creating great momentum when working with groups is to put aside ego. Naturally, you will be greatly attached to your own ideas. Be the bigger person, and let other people have a shot - they may really surprise you by coming up with something terrific that you couldn’t have thought of on your own.
No one is coming to save you.
In improv theatre, it’s just you and maybe a buddy on the stage. You’ve got to find your own solutions to any problem. There is no deus ex machina. You must adopt the attitude that everything that happens was supposed to have happened, rather than getting caught-up or stuck on a flub or mistake. It sounds simple, but imagine how different it feels to not “wait” for somebody else to come and fix it. It’s very self-empowering to know that you and only you are responsible for digging yourself out of any situation you get yourself into. 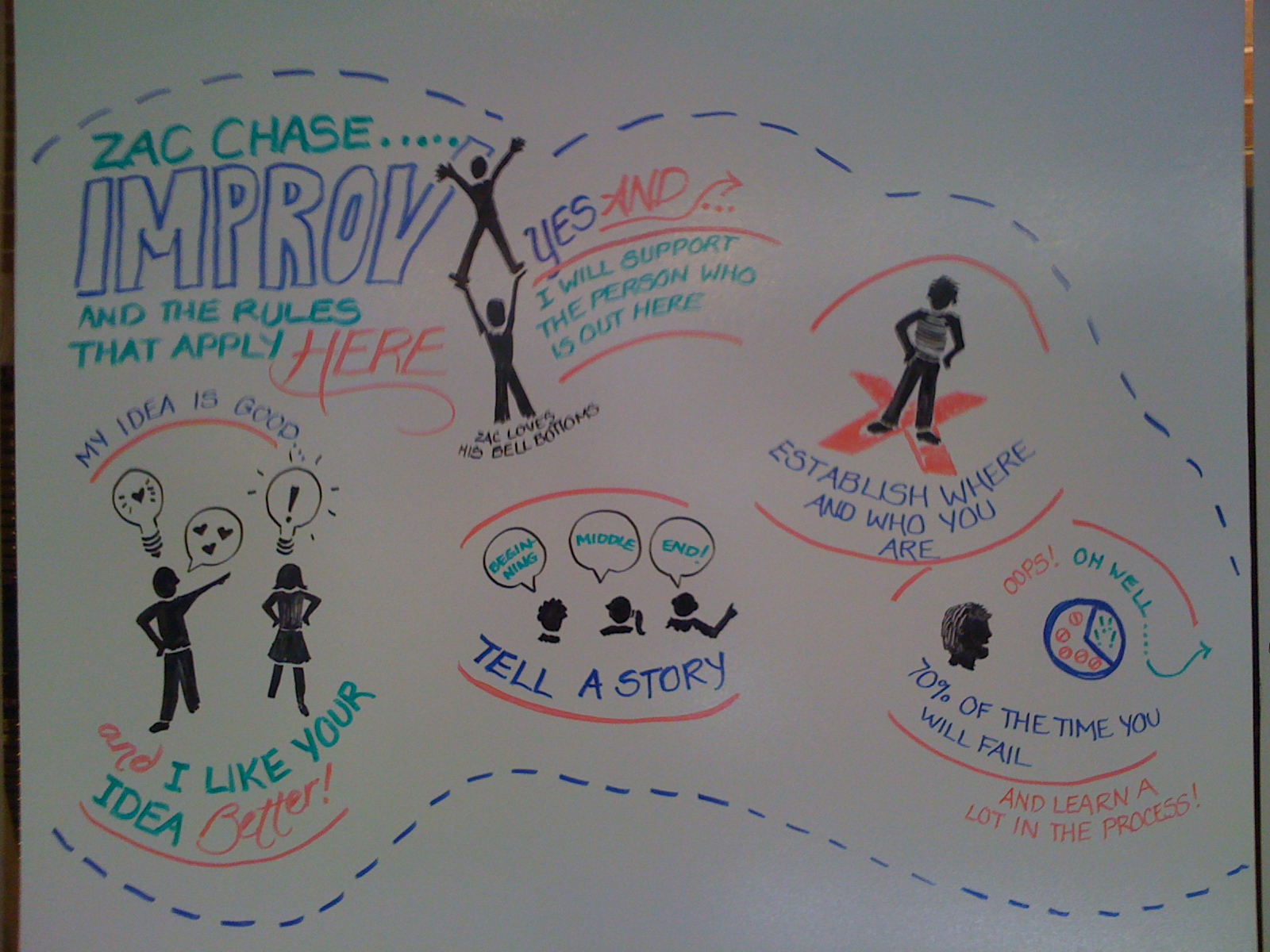 Buffy Hamilton
I am very disappointed to report that I was wildly, deeply underwhelmed by Hamilton’s talk. She is quite famous in library circles, and I’d heard so much praise regarding her accomplishments. To be fair, she reported having a massive migraine, that nearly prevented her from coming to the conference, so perhaps I did not see her in her best light.
She gave a talk about having gone to the recent ALA conference in New Orleans and dining at Bouche restaurant. She went into great detail, outlining the whole experience. The atmosphere was one of delightful sophistication, she had a comfortable private booth with dear friends, the food was delicious, the wait staff perfectly attentive and caring. She challenged libraries to create such a marvelous experience for their patrons by providing comfortable spaces, cheeriness and attending to their patron’s every need the same way that restaurant did. Honestly, my take-away on this was, “Wealthy white women like to be pampered at fine dining establishments. News flash at eleven!” I felt so disappointed by this. I had been looking forward to hearing her speak, I probably expected too much.

Announcement of challenges and teams

These were the “winning” challenges. I had initially been in cohort C, but was later reassigned to cohort B. I asked if there was any particular rhyme or reason to the cohorts we’d been assigned, but it seemed as if the conference organizers were simply keeping attendees from the same institution on different teams.

What must K-12 libraries do to spur continual innovation, to make libraries the places and spaces our learners crave going forward?

Like a city provides a park the people can use in the myriad of ways, how can the library of the future be designed like a park of possibilities?