Here are my notes from Day 2 and 3 of the Re:Imagine Ed conference. It was, as you can imagine an intense, exhilarating and exhausting weekend. We worked continuously for 12+ hours on Day 2, and about 8 hours on Day 3.

Meet w/ teams - make introductions
At a rough guesstimate, I’d have to say Cohort B consisted of roughly 30 people. We were then subdivided into working teams of 5 or 6 people. With the exception of myself, everyone in my group was an elementary school librarian.

Meet “mentors” - design professionals guiding each group
Each group was given a packet with information on our challenge.

I had an interesting conversation with some of the designers this morning. They asked what I thought of the conference so far, and I took and risk and confessed that I was excited by everyone’s energy, and I liked so much of what they had to say, but then... I felt like the creative team was jumping off a cliff, into something I didn’t understand. Like, a speaker would pace along the stage and say something like, “Library. Is. Verb.” and I had NO idea what that meant. Okay, you said it slowly and importantly, and then gazed triumphantly around the room. I don’t think that’s the same as actually saying something worthwhile! I hated feeling like the jerk who had to announce that the emperor had no clothes. I wanted to be part of the fun - but in all honesty, I couldn’t “fake it” when it came to things like this. Much to my surprise, they laughed and agreed, and said they’d try to find some ways to communicate a little better.

Share w/ group observations that seemed important or interesting to you in the research
These observations were noted on giant paper.
I was pleased that several important questions regarding the surveys we’d been given were immediately addressed by our group. How large were the sample sizes? What was the age/gender/income level of the people who were responding? Was there any kind of bias inherent in librarians asking their students for feedback on libraries while in a library setting? Any kind of self-selection bias to these surveys? We didn’t have the answers to any of those questions, and were forced to plunge ahead with the information we had at hand. Here’s what we came up with:

Books matter
Interestingly, many of the young people surveyed reported that they still highly valued books. They saw books on equal par with online resources and wanted both types of materials at the library.


Comfort
Overwhelmingly, young people wanted the comfort of their living rooms in a library. They wanted soft seating, the ability to bring snacks, clean, well-lit spaces with natural light. They wanted study rooms so they could meet with groups and socialize, but they also wanted designated quiet areas.

Interestingly, I got into a side-conversation with my cohorts - all highly educated folks, passionate about life-long learning (in short, potentially our ideal patrons) who told me they don’t go to public libraries much, because of the homeless who spend their time there. They felt that homelessness and libraries went hand-in-hand and far from being considered a problem, public libraries should embrace their role as a safe place for homeless to go and step up to the task by providing showers, sleeping cots, and social services. (Several of them were very emphatic on that point about providing showers.) They felt very good that homeless people had a place to go. They appeared to view public libraries as community centers valuable for the space they provide and saw their school libraries as “true libraries” where books and learning would be the focus.

Step 2: Based on those observations, we did some drawings of ideal interactions in a K-12 library 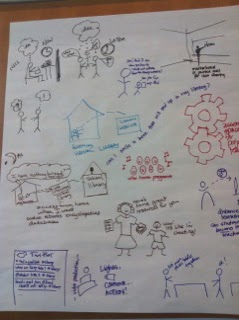 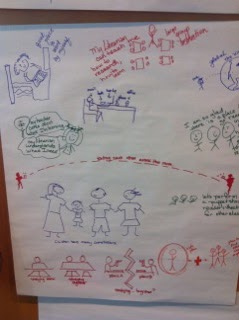 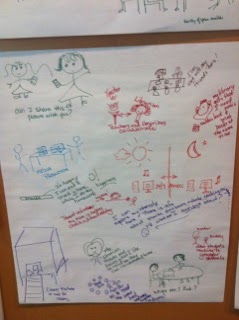 Provocateurs speak
In what was referred to as a “keynote slam” several well-respected designers and librarians each gave short 10-minute talks.
Nancy Giordano gave a talk as a brand futurist. She claimed that 95% of people crave mastery of a subject, 5% crave new experiences. She said team workers who work outside their job description often excel, because they are more innovative.
David Staley gave a very visceral talk about using smell to process or present information.
Helene Blowers from Columbia Public Library gave a talk about playfulness in the library - demonstrated with a bubble machine. She averred that if you graduated library school in 2008, you are already a dinosaur.

Step 3: Prototyping
Based on our earlier drawings we then “prototyped” - writing concrete items, policies, etc. that could be implemented on to Post-It Notes.

Another  break for provocateurs
Tom LaForge of Coca-Cola gave a talk about how communities will be getting smaller and more local in the future.
Devin Moore gave a talk about how values change over time.
Carl DiSalvo gave a talk about using maps as musical instruments by recording ambient sound.
Trung Le gave a talk about faster than light neutrinos and some good design ideas including “do no harm” (children should have spaces that are as well-designed and comfortable as the spaces that adults get.)
Step 4: Sorting ideas
Our ideas are now posted on the wall in one of 3 categories: “Do Tomorrow” - easy implementable ideas, “Valuable” - things to work on right away, even though they may not be completed in a single day, and “Further Thought” - pipe-dream type stuff
After some arranging and re-arranging of ideas (and Post-its) we take our “valuable” ideas to work on further.

Step 5: Ranking ideas
Each of those ideas were entered into a spreadsheet, with points assigned for the scale of the project, the cost, the time to implement, etc. As we’d been warned, some of our most breathtaking ideas only ended up with a fair to middling grade, because of one or other of its’ aspects had some inherent difficulty. Cheap, easy, global innovations naturally rose to the top. Our sub-cohort chose our top 4 ideas. We then re-grouped with our larger cohort to further combine our best bets so we could land on the best of the best. We experienced some “creative abrasion” which is a really polite way of saying that at this point, conference attendees had spent nearly 12 hours continuously brainstorming. Many people reported feeling “fried” and tempers ran high as we debated which ideas to work on. We did finally settle on 4 very excellent ideas, and after reformulating our groups, called it an evening.

The winning ideas in our cohort were:

We had 3 hours in the morning to work on creating a presentation for the larger group. Honestly, this felt a lot like being a contestant on Project Runway. It was not nearly enough time to come up with something you could really be proud of, but you just had to “make it work,” as Tim Gunn would say. I was excited to be working with a new group of diverse people, including a middle-school librarian, an interior decorator, a graphic designer, a library consultant and a school administrator.
We generated some really positive progress, but then broke down a bit, as half the group favored presenting a skit of some kind, with the other half rooting for a slide presentation, and a lone hold-out who was not happy with either of these ideas. We scrambled to come up with a last-minute presentation - a hybrid of an improv skit paired with a Powerpoint. To be honest, I was less than pleased with our final product, as a lot of compromises had to be made. To my surprise, our talk was very well received. I do think we were greater than the sum of our parts and came up with some really valuable ideas.

Our slide show is here.

One idea our team came up with the idea of making a library like a zoo. People were excited about the idea of offering pets, especially rabbits to check out. Now, obviously there are a tremendous number of problems with this idea. I’m not even going to bother to point out all the things that could go wrong with such a program, as the challenges inherent in such an undertaking are too many to list. But! The reasons to do something like this would be that it’s something truly innovative, certain to capture the attention of the media and possibly create some interest, new learning experiences and fun around the library.

We also came up with a great tagline: “Homework Hacking Hosted Here” A lot of people use the term, “hacking” just to mean taking a shortcut that makes life better. Using the library could be a way to “hack” your homework - get it done faster.

Decorate the library with fairy doors for a sense of whimsy and fun.

Buffy Hamilton and a few others ran into some creative differences and broke off to form a new “Cohort D” Their presentation was based on comparing the movie Field of Dreams to libraries. I was not very familiar with the movie, and didn’t understand most of their presentation. I got the sense that the conference hosts were eager to reward non-conformity - so you had to approach many of their challenges and projects as double-speak. They’d tell you to work closely with your group, but then praise you for doing the opposite.

Another group came up with the idea of a kitchen island in the library, as your mobile technology and workstation area.

One group came up with a library design that looked like a tree... with stacks beneath (like roots) and terraced levels for socializing above.

In short, here are some of the ideas that kept coming up over and over again during the course of the weekend:
On the whole, this was a conference that was heavily geared towards the issues and concerns facing private school libraries, but it was interesting to get the chance to attend... many of the ideas that were presented are ones that I’m sure would translate well to use in public libraries, and if nothing else, it’s helpful, as a children’s librarian in a public setting, to know what is happening in the parallel field of school libraries.

Continue checking the Re:Imagine Ed website as they compile other blog posts, design challenge information and resources generated over the course of the summit weekend.

Resources recommended to me:

Brockman, John. This Will Change Everything, Ideas That Will Shape The Future. HarperCollins, 2010.

Pecha Kucha: http://www.pecha-kucha.org/
(If I understand correctly, these are a series of fast-moving slide-shows put on by architects and designers - as a side note, one of the best slide show talks I ever gave the slides were accidentally on fast-forward, forcing me to jump through my talk faster than anticipated. Everyone's feedback was that it was the most exciting slide show talk they'd seen in a long time and they appreciated having time at the end for questions.)

An alternate to Powerpoint: http://prezi.com/


Resources I recommended to others:

Edwards, Margaret A. The Fair Garden And The Swarm Of Beasts, The Library And The Young Adult. ALA Editions, 2002.
Posted by Madigan Mirza at 6:17 AM